CDC and SDC partner to construct home for elderly woman 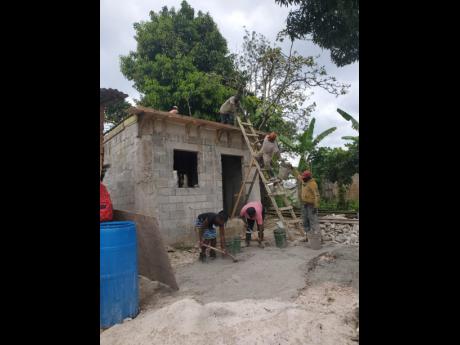 Residents of Warsop in Trelawny join hands to construct a house for an elderly indigent woman in the community. The project is being spearheaded by the Warsop Community Development Committee (CDC) in collaboration with the Social Development Commission (SDC). (Contributed photo)

The Warsop Community Development Committee (CDC) in Trelawny and the Social Development Commission (SDC) have joined hands and heart to construct a house for an elderly woman in the community who has been living in less-than-ideal conditions.

Seventy-one-year-old Violet Palmer is a widow and has no children. She has been depending on other relatives for shelter at a house that is not suitable for accommodation.

Construction of the one-bedroom concrete structure commenced in August 2021 and is nearing completion.

Upon recognising Mrs Palmer’s situation, Treasurer for the CDC Yvonne Fearon, led the charge to construct a house for the elderly woman, under the committee’s Helping Hands Outreach programme.

The programme was set up to investigate those who are vulnerable in the community so that support can be provided to those individuals. The programme has been in place for approximately three years.

The retired principal says that she was moved with emotions to see the challenges the elderly woman faced after a visit to her home to deliver care packages.

Ms Fearon informed that the woman’s situation was brought to the attention of the CDC, following which immediate action was taken to construct a comfortable abode for her.

“We are an organisation that looks out for the less fortunate… so we would give our shut-ins and vulnerable members of the community care packages... . On one occasion, when we went to deliver the care packages, one of the recipients was this lady and she asked us for two sheets of plyboard,” she recounts.

“When we look at the house, we said that two sheets of ply could not do anything because she needed a room… when we went to the CDC meeting afterwards and we brought it to the table, the SDC officer [Phillip Spence] encouraged us to give her a room so we planned from there,” Ms Fearon continued.

A project proposal was developed with the help of the SDC and funding was solicited from members of the CDC as well as the Jamaican diaspora.

“How we got help is that we asked a few members of the CDC and mostly our friends and we solicit help from… some people from abroad and a few people here in Jamaica,” she explains.

Ms Fearon says she “feels a sense of pride and joy” to be able to lend a helping hand to the people in the “community in some way or the other”.

She says she did not hesitate to join the project after witnessing first-hand the dilapidated structure that Ms. Palmer called home.

Mrs Logan tells JIS News that she helped to rally support from members of the community, some of whom contributed materials for construction.

“I said let us see what we can do as a community to help her by giving her a concrete structure. So far so good. It is a bit difficult but I use my phone to beg around the area and I use it to beg abroad… they respond to me by giving a bag of cement, a length of steel and stuff,” she indicated.

Mrs. Logan says that while the structure is almost complete, more support is needed to install flooring and fixtures.

SDC Parish Officer Phillip Spence, in sharing the Commission’s involvement, tells JIS News that SDC remains committed to facilitating the empowerment of citizens across the island, especially those who are underprivileged.

He says he is pleased to see the tremendous outpouring of support from members of the community, some of whom gave of their time to help rescue the elderly woman from her destitute condition.

“The Social Development Commission donated money towards the project along with so many kind persons within the community.

“Everybody played a great role, some persons cooked food on the day and some persons volunteered their time in labour. You had masons. They came out and they built free of cost. Other masons came out and gave us a heavy discount on their labour. Quite a number of persons donated money towards it”.

He added that the local hardware was also supportive of the initiative and “gave us a lot of the material [on credit] without collecting the money, and we try to pay as we go along so they tried to accommodate us as well”.

A beaming Ms Palmer says she is thankful for the kindness that has been shown to her by the Warsop CDC and other members of the community.

The elderly woman shares that she has been living in an uncomfortable state for a number of years.