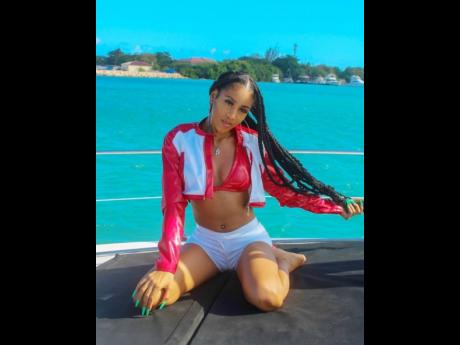 Beauty queen-turned-artiste Lanae is celebrating the feedback to her latest video, Stay Down Deh, featuring Leftside.

The video, which was released on June 22, and shot and directed by Wilmot Films, has racked up close to one million views since its release.

"The video is great ... delicious eye candy, yacht scenes, beautiful girls, aquamarine waters; it is the perfect summer video and song. That's why the public has responded to it so well, almost a million views in a month," Lanae said. The video has reached the million views landmark.

Released on the Keep Left Records imprint, there are plans for an aggressive marketing push in the US beginning next month.

"We're going all out with this one. People love the 'Stay Dung Deh' dance, and we're preparing to do a press run in the US to get the song added to the rotation at major radio stations along the east coast of the US," she said.

A graduate of the Montego Bay High School, Lanae, given name Lanae Gillette, grew up in Montego Bay, St James. After leaving high school, she tried her hand at modelling, doing several events at hotels in and around Montego Bay, and at entertainment events at Pier One. In 2018, she dabbled in the world of pageantry when she entered and won the regional Miss Universe Jamaica Northwest pageant, while grabbing the Miss Congenial sectional prize.

Later that year, she also entered the Miss Jamaica Universe contest where she also won Miss Congenial. She recorded her first song in 2018. Another single, titled Whine, has racked up 4.8 million views on YouTube.