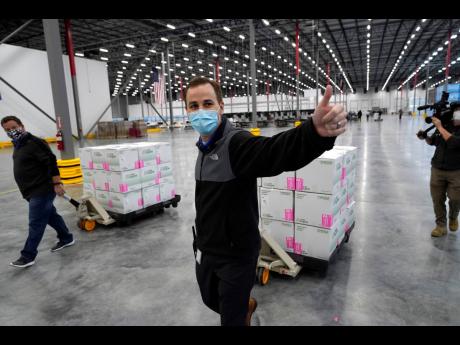 A worker gives a thumbs up while transporting boxes containing the Moderna COVID-19 vaccine to the loading dock for shipping at the McKesson distribution centre in Olive Branch, Mississippi, yesterday. It is expected to be given out starting today. The Pfizer and BioNTech vaccine was rolled out last week. (AP Photo/Paul Sancya, Pool) 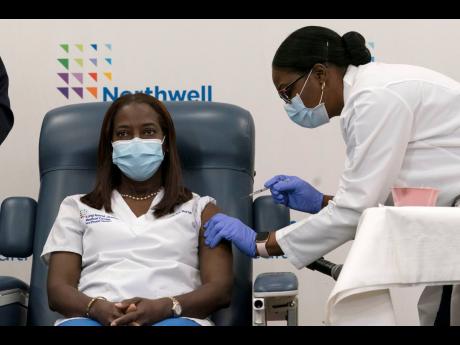 Wallace Sterling, a colonel of the Moore Town Maroons in Portland for 25 years, said as as leader, he would encourage his people to accept the COVID-19 vaccine.

"I won't impose it on anybody. But if you're a responsible person in a leadership position with what's going on, if you're going to take a gamble for health, then I would encourage persons to take it. I don't know the problems that may stem from it... not even the scientists know, but we take chances on other things that end up to be more detrimental to us," he said.

Sterling admitted to THE STAR that there is a cloud of uncertainty among some people in his community about the vaccine.

"It's not that people are overtly against the vaccine, it's just that this COVID thing and pandemic may have caused them (scientists) to take some shortcuts. Some people just don't want to be the guinea pig for others. But if it should behave the way manufacturers and scientist say, then it should be okay," Sterling reasoned. "If people want to travel to certain country, they may have to be vaccinated before they can. So, as much as some people don't want to get it, they may be forced to get it done."

But Marcia Douglas, colonel for Charles Town Maroons, also in Portland, says the COVID-19 vaccine, which will be available in Jamaica early 2021, will not be welcomed with open arms.

Douglas believes that the motives behind the Food and Drug Administration-approved vaccine are unclear and need to be demystified by the Jamaican Government before her people roll up their sleeves to accept it.

Douglas believes that the natural herbs that Maroons are accustomed to should be enough to protect them from COVID-19.

"If this is a flu-like symptom, why do we need a vaccine for that when there are different herbs and medicines to take for the body? Is it that the vaccine will contain something other than medicine? These are questions that have been asked around the community, and these are questions that are asked by young people," she said.

For Mark Right, an Accompong Maroon in St Elizabeth, there is no room for persuasion.

"We are not into the vaccine thing. We originally grown up on the herbal medicine and that's what we still use. Even without the vaccine, we still safe from the virus. And we still practise the social distancing and wear we mask and dem stuff. But the vaccine is just a no for us," he said. He says even if Holness took his vaccine live on television, "That nah go convince us".

"Health people were here doing their research and it's the same type of reports that they got right through the community," he said.