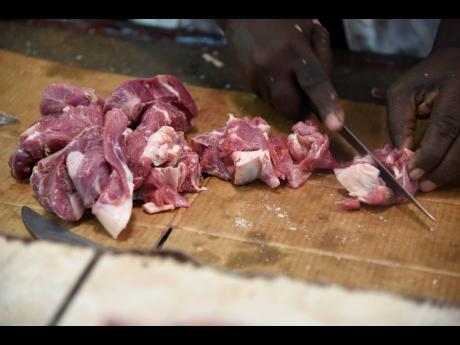 Goat meat being prepared for a customer at the meat market in Cross Roads, Kingston, yesterday. 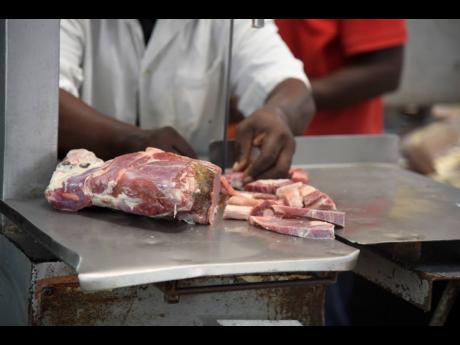 Goat meat is among the most sort after at this time of year. 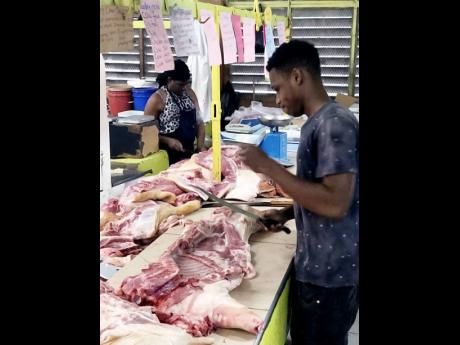 It's mid-morning in Kingston, Christmas is just a few days away, and meat vendors in the Cross Roads Meat Market are busy chopping and packaging pork, beef and goat meat for a slow stream of buyers in search of their favourite cuts for the holidays.

In keeping with tradition, pork and goat meat are the most sought-after in the market, but overall, cuts are not sliding off the chopping block as quickly as most meat merchants and butchers would want.

Stephon Dale, for instance, told THE STAR that he hasn't seen majority of his frequent Christmas customers this year.

"We have seen a decrease in customers because due to COVID, most people are out of a job and so forth, so we are seeing less customers coming in. Last Christmas, it was faster than this Christmas," he said.

Busy chopping meat for the customers who have already showed up, Dale says there are certain meat that most people have been requesting.

"People are asking for mostly oxtail, ham and goat. They are not really buying in large amounts though... everybody cut down on what they normally spend before," he said.

Likewise, Glen Lawrence, a meat vendor of 15 years, says he has not seen much happening. He anticipates that things may get more chaotic further today and Thursday.

"Last year this time, I was seeing much more orders. I don't know how in the week will be... the Wednesday, Thursday. It might develop, but it going on steady. The people ordering now, them love goat. Pork and goat a number one! A just a little beef sell," he related.

However, Glenford, who has been in the market for more than 20 years, is seeing things differently. The sharp fall-off in demand has not reached his stall.

"Meat a guh always sell. Remember seh everybody affi stay home and gwane enjoy yuh self. The demand high and deh-deh as usual. People a ask mostly fi the roast pork, goat and the oxtail. The pork and the goat now... high demand! The people dem want the ham and the curry goat," he said in a cheery tone, one that was absent among the other vendors.

One thing they all have in common, however, is their customers lack of interest in buying the meat of doe goats.

"Some a dem seh dem nuh like the smell, and some a dem nuh want none because it get jumped by the male goat. But as a good cook, yuh nah go have nuh preference. It's just how yuh look after yuh meat," Glenford said.

Lawrence says that questions surrounding bestiality help to fuel the perception that the 'she' goat is not for the pot.

"Dem prefer the ram goat. Dem seh the she (doe) goat has been molested and that man shake out them young ones and sell the meat same way," he explained.