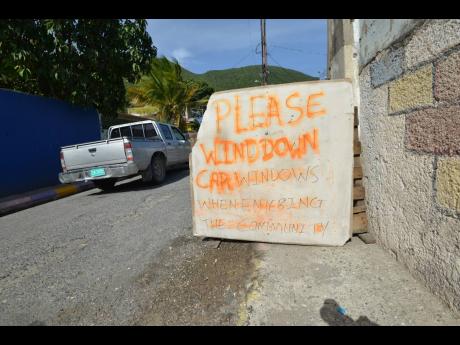 This sign has been posted in Jarrett Lane, a community located off Mountain View Avenue in Kingston. 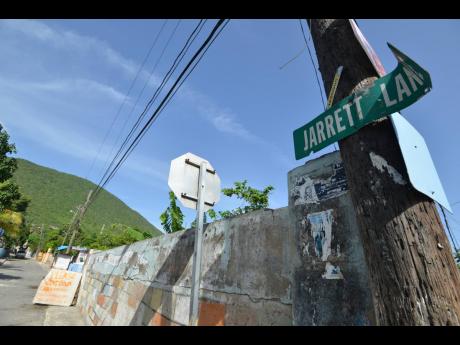 Jarrett Lane has been rocked by violence in recent weeks.
1
2

'Please wind down car windows when entering the community.' That is the sign persons entering Jarrett Lane are greeted with at the entrance of the troubled community.

The eastern Kingston community has been experiencing an outbreak of violence in recent times, and residents are on tenterhooks. The latest in a series of attacks in the community took place on Saturday night. Two persons died from gunshot wounds and three others were injured.

According to the Constabulary Communications Unit (CCU) of the Jamaica Constabulary Force, at about 8:15 pm, a group of persons were standing in the community when a car approached and the occupants opened fire at the gathering. Kerr Kerr, 32, and Marvin 'Borrow' Westcarth, 35, were shot and killed.

The incident took place metres from the 'Please wind down car windows' sign.

When THE STAR visited Jarrett Lane yesterday, Westcarth's loved ones, including his two daughters and their mother, were trying to come to terms with his sudden death.

"His other daughter is on honour roll in high school and him nah go deh here to see dem shine. Anyone who know Barco will tell yuh say him is a jovial youth who work hard for him family. Him didn't deserve this,"the woman said.

A family member, who transported Westcarth to the hospital on Saturday night, said she prayed earnestly for him to survive the ordeal and constantly reminded him of his daughters.

Beg him to stay awake

"He was baffling and him grabbed on to mi blouse and him let mi go and mi keep on a beg him to stay awake because him daughter dem need him and him really try. But when him reach hospital mi see him look up on mi and him head drop back down and mi realise say him a go home. A December him suppose to leave the island because him mother was filing for him. Is not a youth who inna war. Him is a working class," the relative said.

"Right before him dead him outside a run joke with him friends dem, but him did suppose to go to a party at him workplace and it look like a di drive him deh out a di lane a wait on, and dem kill him," the relative added.

Saturday's incident is part of a recent flare-up of violence in recent weeks which resulted in the death of at least six persons and few others injured. THE STAR spoke with a few residents who all stated that they are merely victims of the bloodsheds as they were not the attacker. One of them told the news team that he will not allow the violence to steal his joy.

"They want to take away my joy but is God alone mi fear. We don't know who we are warring with so it feels like we are in a shadow match. Is two drive by happen within a few weeks which claim the life of a woman. A next woman is recovering physically, but she need counselling cause she nah take it good. We are not warmongers on Jarrett Lane," he said.

The men have high praises for the police who they said have been keeping a close watch on the community.

Commanding officer for the East Kingston police, Superintendent Tommie Lee Chambers, said she and a group of stakeholders will be visiting the community today.

"We will be increasing the police presence in the area and we will move in the space tomorrow (today) to speak with the residents. Most of the times, what I see is a lot of innocent persons are being killed in the attacks so we are going to have more proactive policing," she said.