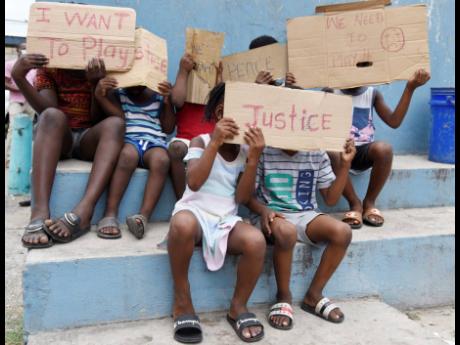 These children join the protest for peace in Wilton Gardens, Kingston, yesterday.

'I want to play'. This is the what is written on the placard borne by a little boy who appears no older than eight years old as he joined members of his Wilton Gardens community in protest against incidents of shooting and murders.

Two persons have been killed in the community, popularly known as Rema, in recent days.

"The violence a erupt in a we community and it a affect all a wi, and some come out and some hide. Some a bawl say dem fraid, but mek mi tell yuh summen, if yuh a guh fear man, it nuh make no sense. Mi nah make because of nuh gunman mi can't walk inside of the community whe mi born and grow," one woman said.

The Kingston Western Police Division, in which Trench Town falls, had recorded 63 murders up to July 10. There have also been 67 cases of shootings.

Peace in her community

The woman said she does not want to see anyone else added to the statistics. She just wants peace in her community.

"Mi nuh wah deh a mi bed and get any more phone call say anyone else dead. Mi want it done suh all a unuh whe have gun and tink it make unuh bad, unuh don't bad. All it do is turn unuh inna evil and wicked. It make unuh hate and kill people whe unuh love. All a unuh grow together, unuh done it," she said.

Another resident noted that the conflict is affecting the livelihood of the community.

"A summer time now, and look how long the country did under lockdown, and no school never did a keep. And the Government a give free summer classes for two hours, and yah tell mi seh the baby dem can't come out and go school because a violence. Mi just wah peace inna mi community," she said.