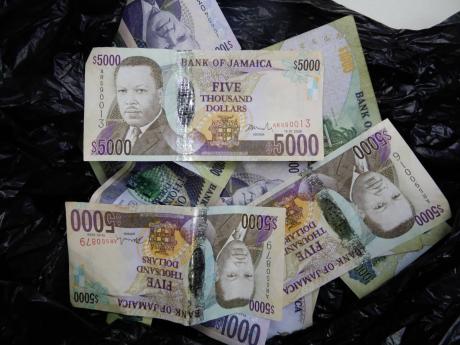 A policeman who has been serving in the Jamaica Constabulary Force for the past 19 years was yesterday granted bail when he appeared in the Kingston and St Andrew Parish Court for an alleged breach of the Anti-Corruption Act.

Corporal Allen Henry, who was attached to the Hunts Bay Police Station, was held in a sting operation set up by the Inspectorate and Professional Standards Oversight Bureau (IPROB) on July 17. The allegations are that about 11 a.m. on the day in question, Henry was conducting speed checks by the Six Miles bridge along Washington Boulevard, St Andrew. The court heard that he signalled a motorist to stop for speeding, and informed the driver of the road traffic violation.

It is alleged that Henry solicited $2,000 from the driver, saying "Weh yuh can do? Because dis yah money supposed to go to Government." The driver then asked the accused what he meant and Henry allegedly replied "Just gimme $2,000 and gwane. Me nah kill yuh."

It is reported that the driver took out $5,000 from his pocket and told Henry that it was all the money he had, to which Henry allegedly said, "Nuh worry 'bout that, me will go get the change fi yuh and come back."

The driver handed the money to Henry, and said "Call it a day" and then drove off. However, Henry was held by investigators from IPROB, who apprehended him and escorted him to custody at the Grants Pen Police Station. The $5,000 note was reportedly marked. It is further reported that prior to his arrest, complaints were being made to the Hunts Bay Police Station about Henry's conduct.

The judge granted Henry bail in the sum of $300,000 with up to two sureties. He is to report to the police twice a week and must surrender his travel documents. Fingerprint and stop orders were also made. Henry is to return to court on October 21 when his matter is mentioned.