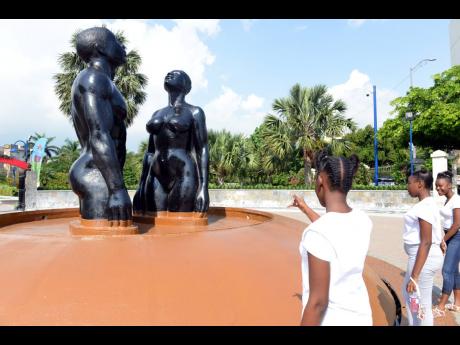 These young ladies admire the Redemption Song statue at Emancipation Park in Kingston. 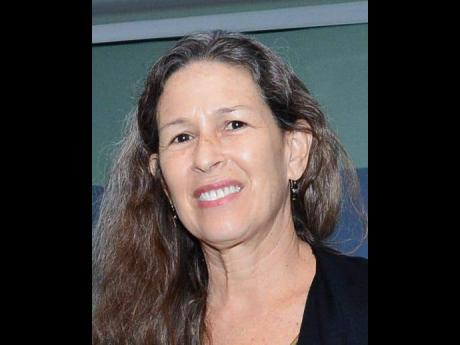 Jamaican artist Laura Facey says she would like to see her Redemption Song statue spruced up to give it greater appeal. The statue, which depicts a nude male and female celebrating their new found freedom, is positioned at one of the entrances to Emancipation Park in Kingston.

"I would like the base of the monument to be redone," said Facey about the monument that has attracted controversy since being mounted in 2003.

"That would be my dream, to see the base redone and made bigger, and have a more dramatic waterfalling feature, and if that could be done in my lifetime, I would be thrilled," she added.

Facey reasoned that the base is too small in relation to the figures. She also said that its current water feature is not captivating enough.

"There is water flowing around the sculpture but because it flows so quietly, some people can't really see it. They have to walk up to it to see it. I want to recreate it to make it visually exciting and beautiful," she said.

The piece holds various interpretations, according to The Queen's School alumnus. For her, it indicates the point in which life can take a great shift, moving from a period of darkness and to one of celebration and liberty. The 67-year-old said her piece symbolises that humanity can transcend trauma.

"The fact is Jamaica has three million people in Jamaica, and three million outside Jamaica, and they have all survived slavery. They are living testament to the fact that the human spirit can never be held down. The Redemption Song monument says yes, let us rebirth ourselves, let's know that we are whole, powerful, strong and amazing human beings," the multi-media artist said.

She finds comfort in the fact that her well-known monument has become a cultural piece. It took a year to complete and she has no regrets, even though it sparked controversy.

As Jamaicans celebrate another Emancipation Day, Facey said she is very proud of her role in creating a focal piece for the celebrations. She revealed that the idea to create her most popular work was years in the making.

"All of your history contributes to what you think and feel, including what you are exposed to at school as a child. I grew up in Jamaica, which is 96 per cent African heritage. My great-great-great-great- great grandmother was a slave. I have her manumission document, which is a document that shows when she was freed as a slave. So that is a part of my history. The monument of emancipation is a very important piece for me, because it is like a marker in my life," she told THE WEEKEND STAR.

Reflecting on her Redemption Song work, Facey said "I feel very proud and I feel happy in my soul. I think I did my best and I feel good about it".