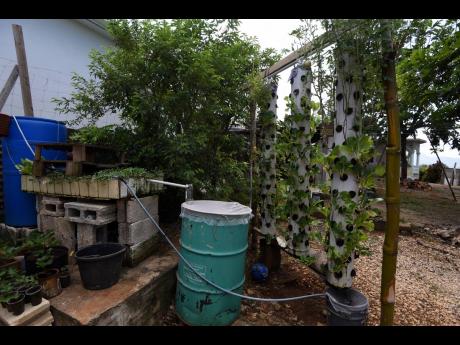 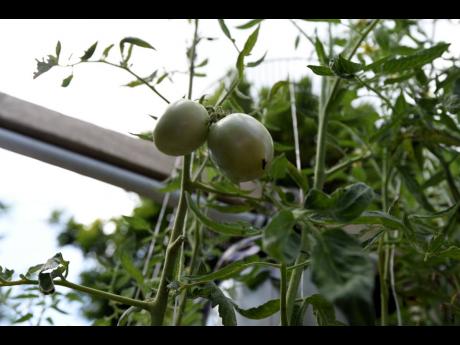 Tomatoes are among Bascoe’s crops. 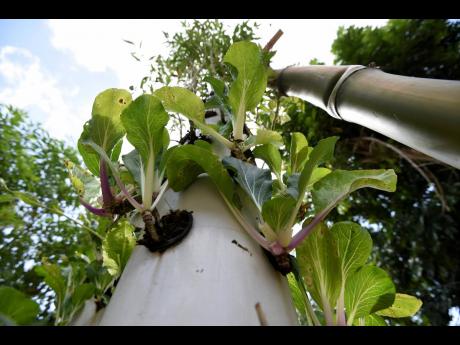 Bascoe does not have to use chemicals like pesticides for his crops, including pak choi seen growing here. 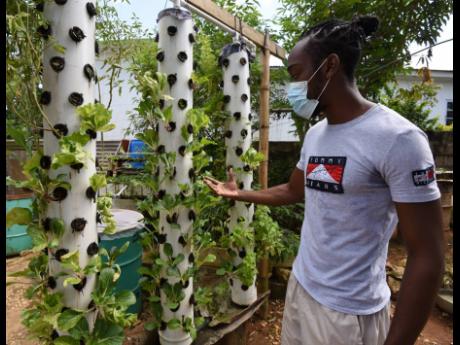 Motivated by the soaring prices of ground provisions, university student Shandae Bascoe decided to do farming, but not in a traditional way.

He grows his crops, mostly vegetables, using a modern-day farming technique called soilless aeroponics, which Bascoe has been enjoying for the past year.

Soilless aeroponics is the process of growing plants, suspended in the air, by supplying a nutrient solution in a mist to the roots of the plants. This is different from hydroponics in which the crops are submerged in water.

Growing up in Linstead, St Catherine, Bascoe was actively involved in agriculture with his father Norris, as they cultivated food for the home. However, while in his second year at the University of the West Indies, Mona, in 2018, he discovered alternative farming techniques and made a conscious decision to design his own farm.

At his home, three towers filled with 75 hanging plants are fed via a fish tank filled with 18 tilapia that is processed through a hydroponic system of water crest plants, which pumps that water to the towers.

"A system like this, it is very high in drought tolerance. So, it is very efficient in the way it uses its water, as it uses two drums of water per month to grow all of those crops (pointing to the towers). The way that these are harvested, allows for the plants to regrow and these are here almost a year, since last year September. It uses very little water, as opposed to conventional farming and using the technology, you can stabilise your production and provide consistent quality at a consistent pace," Bascoe explained.

The process starts with seeds being planted in cups filled with coconut husks that take up to two weeks to germinate. Through this soilless approach, he stressed that there are no chemicals like pesticides associated with his farm and there are no insects, weeds or fungi. The crop turnaround time is only three months.

Having a solid knowledge of chemistry and biology, the 25-year-old uses it to his advantage to ensure his plants receive the optimum level of nutrients.

"Even though it looks outlandish and unorthodox, this is actually one of the cleanest ways to produce vegetables. With this system you don't have to worry about too much water, as the system is naturally irrigated from the moment it leaves the sprinkler nozzles," he assured.

But he admits that he worries about electricity, as his plants are watered by a time-censored pump and so he intends to make his farm solar powered. The Linstead Primary School graduate told THE WEEKEND STAR that he enjoys his technological approach to farming, as it eliminates time spent tilling the soil or clearing away land.

"Using a vertical model, it takes up only two square feet. It allows you to plant at a denser capacity than conventional farming. You can increase your profit margins and allow you to grow a lot more. It allows me to grow very clean vegetables, very natural. Using this very organic way of growing, it helps to provide a lot of vegetables and we can feed ourselves," he said.

He urges more Jamaicans to invest in alternative methods of farming, as droughts and floods drive up the costs of produce and vegetables. He hints that in the event of a hurricane, the farm can be moved to a dry space indoors and sprayed with water once a day.

Before starting his farm, Bascoe completed an internship at Chamber's Hydroponics Farm in Manchester that equipped him with the necessary skills. Now completing a course in aquaponics training with INMED Caribbean, the Charlemont High School alumnus shares that his desire is to educate others about the joys that modern-day farming techniques bring.

"People think you have to put your hand in the dirt and you have to go out and stand in the sun all day. But a system like this, you don't have to deal with any of that. I am here and I am going to start planting seedlings in a minute and I don't need any protection, other than a pair of gloves, if that. It is very clean, it is easy and intuitive to work with because all you do is plant, place it in their grow sites and you're finished," he said.

The farmer hopes to expand his project to accommodate 30 towers with crops such as cilantro, broccoli, kale and cannabis. He also has intentions to build a greenhouse, using LED technology, to shorten the time a plant needs to reach maturity.