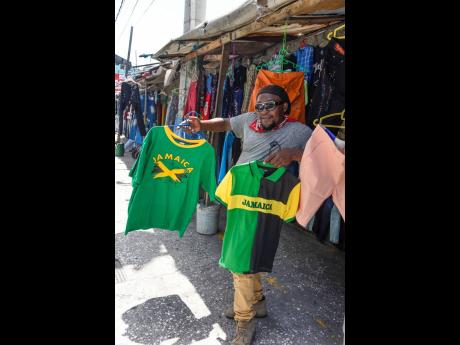 Patrick Logan says he has not noticed any increased demand for Jamaican wear since the start of the Olympic Games or the ‘Emancipendence’ season. 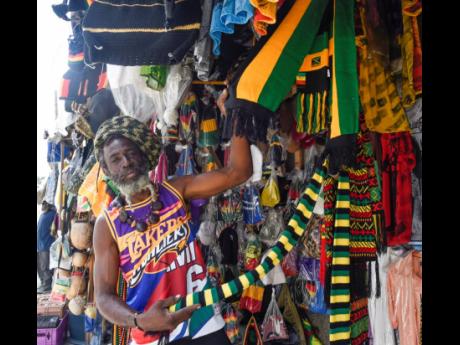 Jah Dale, a vendor in Half-Way Tree, St Andrew, shows off a few of his Jam wear.
1
2

Heightened national pride fuelled by the 'Emancipendence' and dominant performances by Jamaica's athletes at major sporting events, such as the Olympic Games and the World Championships of Athletics, have normally increase the desire of persons to dress up in the national colours.

Clothing vendors, especially those who sell Jamaica-branded items from stalls on street sides, in markets or arcades, say they normally look forward to increased patronage at this time of year. However, thanks to COVID-19, which has ravaged the economy and forced the implementation of various restrictions, the usually bountiful period has become 'tamarind season'.

"The sales are like any other given day," Jah Dale, a vendor in Half-Way Tree, St Andrew, told THE STAR yesterday.

"This disease a cramp the people dem style, because them not going anywhere because of the curfew. One time, all dem time here sale a run, but not now. See Olympics a gwan now, suh you would see people a come from country come buy up dem T-shirt to cheer fi di athletes dem, but none a dat nah gwane, so you realise say mi a make about half or less of what mi usually make. Tourist dem use to pass by, but not anymore," Jah Dale added.

Another vendor, Patrick Logan, said he has not noticed any bumper sales as a result of the Olympic Games -- especially after the 1-2-3 finish by the Jamaican trio of Elaine Thompson-Herah, Shelly-Ann Fraser-Pryce and Shericka Jackson in the 100-metre final at the Tokyo Olympics on Saturday.

"Mi personally don't see an increase in sale this year, but mi will sell like normal same way. Mi nuh really think people will wait on the holidays to come to buy a shirt, because people buy them for various reasons. Back in the days, we could sell more, but curfew drop early on holiday now because of the pandemic, suh we nah guh see an increase in sale now," Logan said.

In addition to what seems to be fewer 'Jamaica' shirts being displayed, there also appears to have been a decline in the number of 'flag men' who normally weave through traffic-filled roadways with their black-gold-and-green wares and vuvuzuelas. One vendor told THE STAR that the downturn in the economy is chiefly responsible for the shift.

"Di people dem just broke and nuh have nuh money. Mi still a come out same way and give thanks fi any sale mi can get, because times hard and people just nuh have nuh money to spend on buying clothes," said Jimmy, another vendor in Half-Way Tree.

In July, the Statistical Institute of Jamaica reported that the economy declined by 6.7 per cent decline during the first quarter of this year, when compared to the same period in 2020. The economy shrank 10.2 per cent between March 2020, when the pandemic started, and March this year.