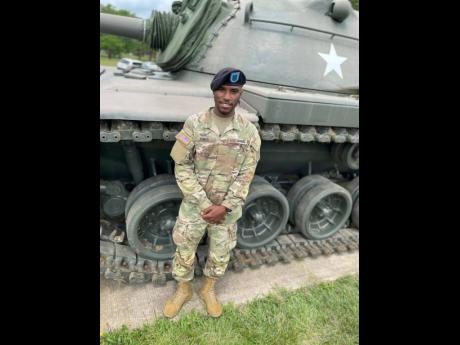 Lincoln Jonas is a member of the 84th Chemical Battalion in which soldiers are trained to combat chemical, biological, radiological and nuclear threats.

Soldiers who make the Commandant's List are persons whose course achievement is significantly high. This includes having at least 90 per cent academic average.

"This means a lot to me because being on that list can help me with getting promotion and it set you apart from your peers," said Jonas, who grew up in Gordon Pen in Spanish Town.

"It feels good to know that I grow up in a tough community and I didn't become just a product of what's going on around me," said the youngster who migrated to the United States of America last October.

Never lose sight of their goals

Jonas said that he is encouraging the youths, especially those in the inner cities, to never lose sight of their goals.

"I want to encourage the youths to just remain focus and don't trod on the wrong path. Don't be bended by peer pressure and follow what the crowd is doing. If it means that you will have to separate yourself from your peers , then just do it and get your life together," he said.

Last Friday, as Jamaicans at home and abroad celebrated the 59th Independence, Jonas was graduating from the Advanced Individual Training programme that he undertook after completing basic training. The private is a member of the 84th Chemical Battalion in which soldiers are trained to combat chemical, biological, radiological and nuclear threats.

The Calabar High School graduate said he has always had an interest in the army but decided to make it his career choice after he migrated to live with his father.

"My father lived in the US and he always spoke about getting me here, so I wanted that job that was secure and beneficial to me, so that too added to my interest in wanting to join the army," he said.

"The basic training was for 10 weeks and that was like a roller coaster for me. I have had good, bad and long days. There were days that I had some physical challenge, because prior to coming in I had a knee injury. After the 10 weeks, I graduated and started Advanced Individual Training and this was where I did a lot of courses and schoolwork," he said.