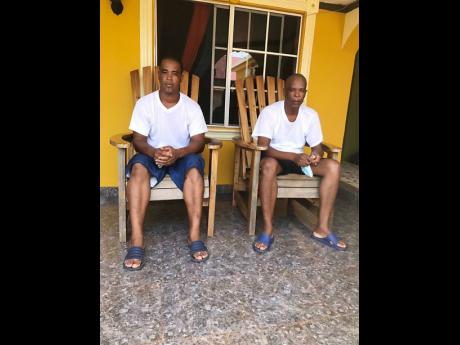 The Robinson brothers, Dave (left) and Ricardo, who survived scary encounters with COVID-19.

Ricardo Robinson, a resident of Rose Hall in St Elizabeth, is showering praises on the Black River Hospital after he and his younger brother, Dave Robinson, clawed their way back from a dark place after they were afflicted with COVID-19.

Robinson, 53, was discharged from the hospital last Wednesday after spending nine days. He said that the experience has left him traumatised to the point where he now has difficulty sleeping.

"Persons were dying all around me. I remember one of the persons who I was sharing oxygen with, he died. Is a whole heap of time I saw people dying. When I was there, for the entire time I was afraid to fall asleep, and I still am afraid. I struggled to breathe, and that was like judgement," he said.

Robinson's fight with COVID-19 began about three weeks ago after he developed a fever as well as aches over his body. He did two rapid COVID-19 tests, which came back negative, and a doctor initially treated him for a chest infection. However, when he developed breathing issues, the St Elizabeth man had no choice but to seek emergency care at the Black River Hospital.

"When mi go to di hospital, mi do a next COVID test and dem fling mi on the oxygen same time," said the 53-year-old.

"There was some really good staff there, because I felt like I was dying, but they reassured me that everything was going to be okay," he said.

While being admitted at the hospital, Robinson was joined by his younger sibling, who had contracted COVID-19 and was having difficulty breathing.

"It's not a plaything. I have seen people die. It nuh nice when you a try breathe and can't catch breath," he said.

Robinson is also convinced that taking the COVID-19 vaccine will offer a great deal of protection against hospitalisation or death.

"I regret not taking it 100 per cent. I always said that when it gets here I would be the first in the line, but I let someone discourage mi from taking it," said Robinson, adding he will take the jab at the earliest opportunity.

Jamaica's public hospitals have been restricted to conducting emergency care services only due to the flood of COVID-19 cases. As of Monday, there were 767 people in the country's hospitals, 280 of whom require oxygenation support. The number of persons in hospitals on August 1 stood at 204.

The country has recorded 1,518 deaths, with another 160 under investigation. Given the current situation, Robinson and his family members are urging Jamaicans to take no chances with the highly contagious virus.

"COVID is terrible," said Latina Broomfield-Robinson, wife of Dave Robinson who spent four days in the hospital after contracting COVID-19.

"Even now, my husband is at home recovering, but he is still coughing up blood every now and again. When he got home, he was really weak, and the experience keeps playing over in his head. In the four days that he was admitted , he saw eight persons died," she said.

Broomfield-Robinson said she, too, tested positive for COVID-19 earlier in August, but thankfully, she was not hospitalised. Luckily, however, their four-year-old daughter did not contract the virus.

"Do not treat every headache like it's regular, and don't take the sniffles lightly. Get tested once you are feeling ill; and don't just take a rapid test, because the results are not always correct. Get vaccinated, because it can spare your life," she said.