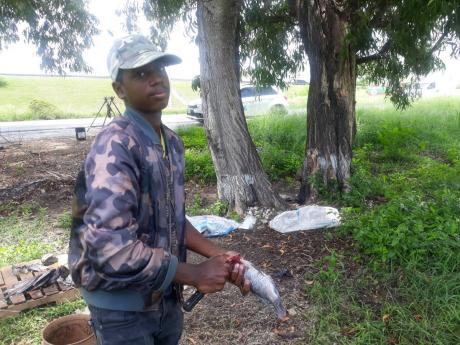 Jerome Dajue says he is not bothered by the minor cuts he gets when preparing fish for sale. 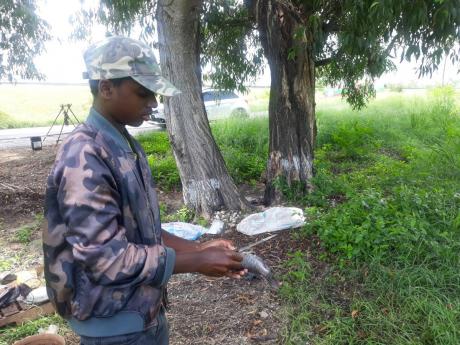 Jerome scales one of the fishes. 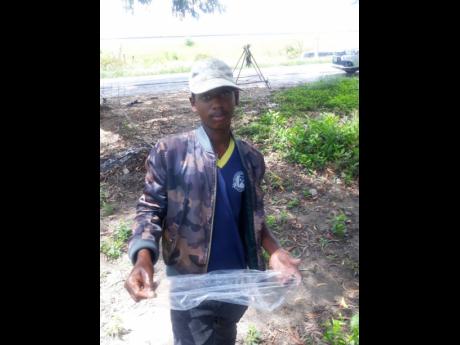 Jerome shows his net that he uses to catch perch.
1
2
3

Strings filled with freshly caught perch were on display for sale along a section of Ferry, St Catherine, yesterday.

Sitting under a tree a short distance away, Jerome Dajue flashed a wide smile, fixed his hat and approached the news team. At just 15, the Cedar Grove Academy student has been making an income for the past three years by selling the 'river' fish, which he said are in high demand.

"People love dem, man, so mi set mi net almost every day. Sometimes mi make couple days pass because we have to give the river time to full up back with fish. Is net mi set a morning time and ride mi bicycle from Gregory Park come sell. It help to buy mi school tings and other tings," he said.

The smaller perch go for $300 per pound and the bigger ones for $500, but the teenager said he often gives discounts. As he skilfully scales the fish, a few cuts and swellings on his left hand were noticeable. He said the injuries were caused by the bones but they are not as painful as they appear.

"I am used to this, man. Fish bone cut mi nuff time but mi nuh make it stop mi from doing mi ting. Mi love fishing and mi father teach mi to do it from mi little so for the past three years, when mi nah go school, mi deh out here so a sell," he said. Netting the perch is an extremely dangerous task as they tend to strive best in crocodile-infested swamp areas in Portmore. Jerome, however, said he is not worried.

Mondays and Tuesdays are two of his better business days, and, like other small business operators, he said he is being affected by the no-movement days imposed by the Government to stem the spread of COVID-19. He, however, states that he tries to make as much profit as possible on the other days.

"Wednesdays are the slowest and normally on Sunday we can make a ting so the lockdown affect mi big time. Mi nuh make nothing bother mi still. Mi just a gwan do mi ting," he said.