No school since start of the pandemic 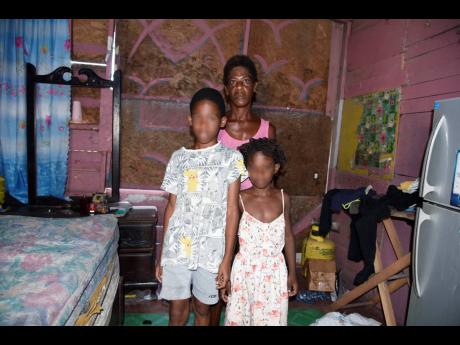 Jasmine Gillepsie and two of her children, Kobe Dixon (left) and Kimona Grant. The children have not attended school since the pandemic.

Jasmine Gillepsie was a picture of despair as she sat at the gate to her Frog City house yesterday. She had a few avocados in a container, hoping that passers-by would purchase from her.

Save for the sunlight peeping from behind the clouds, there was hardly anything bright about Gillepsie's situation. Three of her children -- ages 11, 10 and eight -- have not been in school since the COVID-19 pandemic.

She sighed heavily as she spoke of her desire to have her children in school, but said that she has not been able to send them because she has no laptop or tablet for them to attend school online. Instead, the children wander about in the Ricketts Avenue, St Andrew community while their mother tries to put food on the table.

Gillepsie's 11-year-old child should be in grade six, which means that he should be getting ready for the various abilities tests that are administered as part of the Primary Exit Profile exams.

Being away from their classrooms for 18 months was not what the 51-year-old envisioned for her children. She said that she has fallen on hard times after she lost her job shortly after COVID-19 arrived on local shores last year.

Gillepsie's story was first highlighted in this newspaper in January, under the headline 'No school since March'. However, very little had changed for the woman and her children since the last interview.