Dog owner to sue cop who shot his animal 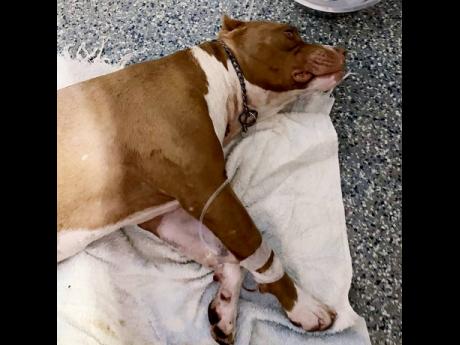 Marley, an eight-month-old pit bull, which was shot by an off-duty policeman in its yard.

An irate Trelawny dog owner is threatening to sue a policeman who shot his pooch in his yard last month. The dog, a pit bull named Marley, died weeks later from her injuries.

"Mi a sue out him 'wara wara'. I'm taking legal action for what he doesn't have. He is going to feel it," the dog owner said.

The man said Marley was sleeping under a truck in the yard when the cop, along with a team contracted by the Jamaica Public Service (JPS), entered his premises. He said the team was out disconnecting illegal wires. He said that he had no illegal connection at his property, and charged that neither the cop, who was said to be off-duty, nor the JPS crew, had permission to enter his premises.

"Marley was a little baby pup. She was just eight months old, and she was on her leash and sleeping. Di man shoot her when she tie up. Him shoot him inna mi yard," the owner said.

He reiterated that the JPS workers and the police had entered his space without his consent.

"They weren't suppose to be in my yard in the first place. They were looking for tiefing light. My meter was already read and they saw that I was straight and wasn't tiefing anything. Him claim the dog startled him, but the dog was on her leash. What if it was a child, would he have fired the shot?" the angry owner questioned.

Tammy Browne, head of the Montego Bay Animal Haven, said that Marley sustained a broken rib and punctured lung as a result of the gunshot wound.

"When the vet called me, he was very upset. The dog owner is very responsible, so the vet would have been familiar with Marley from she was born. The doctor had to do a blood transfusion from another dog. She was barely alive because she had lost most of the blood from her body," Browne said.

Following a successful surgery, Marley's owner began making plans to send her to Canada to stay with his children. However, the dog passed away a little over a week ago.

Winsome Callum, JPS' director of corporate communications and customer experience, said she was made aware of the incident via social media but was not in a position to comment as it was a police matter.