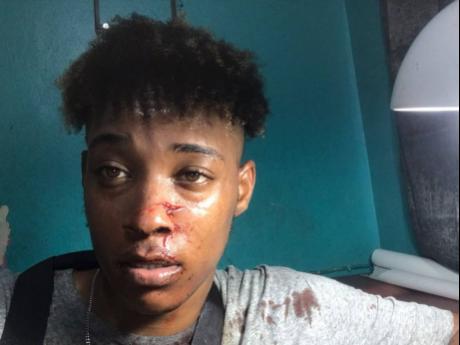 Kymani Wright shows his bruises he said he received from an irate man who demanded he remove one of his videos.

Popular Youtuber Kymani 'iheart_Mani' White said he is seeking the public's assistance in trying to locate a man who hit him in the face with a knife causing injury.

The 23-year-old prankster said he had to seek medical attention at the University Hospital of the West Indies after he was attacked in Half-Way Tree on September 12.

White said his attacker is an acquaintance who had given him permission to make a story time video at his house. He stated that two seconds before the 18-minute video ended, the man walked past in the background. However, three days after he uploaded the video to his YouTube channel, the man asked him to remove it, which he refused.

"He had given me permission to make the video and then he choose to walk in the background. I wasn't going to take down the video because that is like taking a taxi off the road. This is how I make my money and he was okay with it until he said two girls told him that they saw him in one of my videos. It wasn't anything negative or bad that I had posted," he said.

White, who has more than 50,000 followers on social media, stated that although he had ignored several phone calls from the man, he didn't think the situation was serious enough for him to be attacked.

"This teaches me not to be too trustworthy and that you just cannot take anything for granted or take things lightly," he said. White told THE STAR that he reported the matter to the Half-Way Tree police but said his attacker has been keeping a low profile since.