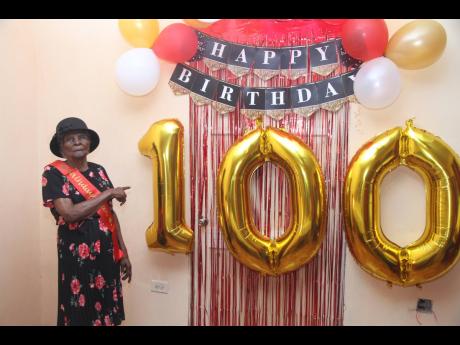 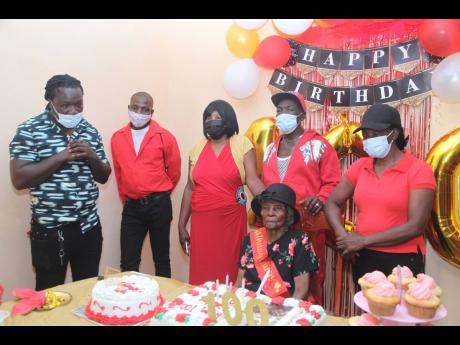 Centenarian Miriam Adina Pusey credits her long life to her faith in God. In fact, her favourite scripture Hebrews 11:1-2 reads: "Now faith is the substance of things hoped for, the evidence of things not seen. For by it the elders obtained a good report."

Pusey, affectionately called 'Mama P', hails from Coffee Piece in northern Clarendon, where she has been described as a stalwart with an undying love for children and the Christian faith.

Her youngest child, Abeva Pusey, said she is a prayer warrior with healing hands.

"When we were small, and even now, if we feel pain and say, 'Mama, I'm not feeling well', and this lady put her hands on you, as she done pray, all pain gone," said Abeva.

Community folk say Mama P's love for children is her most admirable quality.

"I have a great care for children. I love children. I take care of the whole community and all of them call me Mama," Pusey told THE STAR.

Her son, Leonard Pusey, shared she was able make a difference in the lives of many children in and around Coffee Piece.

"She used to cook at the Coffee Piece All Age School (now Coffee Piece Primary) and a lot of people always ask 'Where is Mama?' because if they didn't have money for lunch, mom always give lunch to them," he said.

Reflecting on her earlier years, Pusey said the society was different, stating that children showed more respect to their elders.

"My days was different because they (children) use to have manners. They can't pass anybody on the road and don't say howdy-do. People would come and make complaints say such and such pickney pass and don't say howdy, but my children never do such things," said the mother of five, who asserts herself as a disciplinarian.

Her children describe her as hard-working, and laud her for being relentless in providing for the family after the death of her husband, Mervin Pusey, who passed five decades ago.

"I remember when my dad died, my mom always looked a basket of mangoes and leave it for us, then go look food so we could have for our dinner. I thank God for my mom," said her son Leonard.

Her grandson, Aston Burnett, lauds her as the inspiration behind his Christian journey.

"She's the one why I am a Christian. I grow up with her from I was 10 years old and she was a warrior lady. I remember one time something was wrong with my foot and my grandmother get some bush and bathe my foot, and I was able to walk again. She is really a blessing," Burnett said.

Joining a celebration for Pusey on Saturday was Richard Azan, former member of parliament for Clarendon North Western. Azan said Pusey had made stellar contributions to Coffee Piece.

"She was able to touch many lives in Coffee Piece and surrounding communities, and she was not only a mother to her children, but to every child who walked through Coffee Piece," Azan added.

The newly minted centenarian, who was born on September 19, 1921, while being thankful to have reached the envied landmark, is looking forward to more years ahead.

"I want to live longer to serve God more and more, because I don't do anything yet for Him," she said.