Struggling mom wants a house to call her own 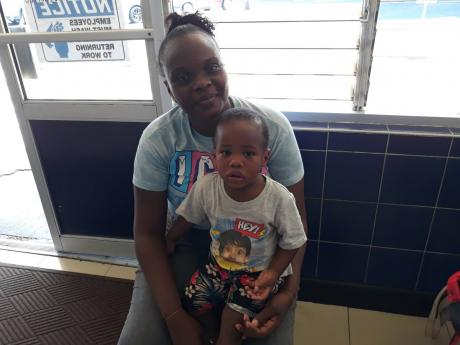 Travaunte Lawrence sits on the lap of his mother, Shanice Jackson.

Little Travaunte Lawrence giggled with his mother, Shanice Jackson, yesterday when he visited THE STAR's North Street, Kingston offices. The 17-month-old boy seemed to be quite a handful as he tries to slip away from her grip while showcasing a wide grin.

Returning his smile, Jackson said he has been one of the main reason she keeps trying at life, and she yearns for the day when she will be able to provide a roof over his head.

She inhaled and exhaled deeply before stating that she is desperately seeking the public's assistance for help, as not only is she homeless, but she is finding it difficult to provide for her toddler.

"When mi small, mi did want to become somebody great in life, but with all a what mi endure, it just cause bare stress on mi head, so it make mi sick," the 27-year-old said.

"Mi love mi baby dem and mi still wah make life fi dem, so if somebody could just help mi with a room or something. Mi don't have any land or anything, but mi wah get even a little one room and a work, nuh matter how small it is," she added.

Jackson and her son are currently living with a friend on Foster Lane in Southside, Kingston.

"Right now is mi friend mi a kotch with in Southside, and sometimes if she nuh cook mi can't eat. Mi glad for the help that she giving me, but mi want somewhere for myself. Mi stress out bad, because when mi see how mi a struggle and can't find a way out, it mess with mi head. Right now mi nuh have no clothes for my son, but people wouldn't even know because mi wash the couple suits whe him have and keep dem clean. Mi did finish high school, but mi never get any subjects, but mi just want a little work," she said.

Jackson said her current situation is far from what she had envisioned, as she had hopes of becoming a successful businesswoman. She, however, stated that her life went downhill after her mother passed away when she was just eight years old.

"I lived with all different type of family members. I would spend like four years with one, then go to another. I was never at a stable home. Mi never waah mi life turn out like this," she said.

Jackson is also the mother of a five-year-old boy, who, she said, lives with his paternal grandmother.

"Travaunte father is trying his best, but he really doesn't have a stable job, so he cannot provide the way he would want to. He will do little jobs here and there, but it takes a while before he can get pay," she said.