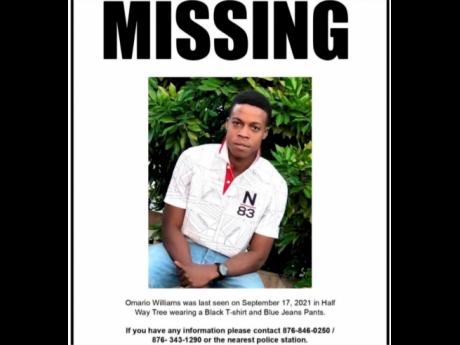 Last week when most parents were congratulating their children on their regional examination results, Francine Tomlinson did not view those of her son Omario Williams, as he was nowhere to be found.

She stated that she wanted both of them to share the experience, but she has not laid eyes on the teenager since he left for work in Half-Way Tree on September 17.

"I didn't open the results as I still have a glimmer of hope that he is going to return home. I am waiting on him to come home so we can look at his results together and celebrate," she said. The 17-year-old, who works at a mechanic shop, is of dark complexion, medium build and about 5' 7" tall.

Reports from the Stadium Gardens police in St Andrew are that about 3:15 p.m., Williams was last seen on Eastwood Park Road in the parish. All efforts to locate him have proven futile. Tomlinson said that she was told that her son was last seen in Tivoli Gardens, Kingston, where he had reportedly gone to visit a friend.

"The last set of rumours that I hear is that dem dash him way. Persons are saying that he was killed, but I can't say he is dead because I have not got a body. All I know is that something is wrong. My child loves me too much and would never leave me under this stress. He has never ever leave home like this before. Even when he left work he called me and tell mi he was coming home, but all now I can't see him a come," she said.

Tomlinson said although it is extremely difficult, she is trying to brace herself for the worst news and implores those responsible for Omario's disappearance to offer her closure.

"If unno do anything to hurt him, I am asking you please to just let us know where he is or let us get his body. I want closure, I want to sleep at nights. I can't just accept that my son just disappeared like that. The last time I saw him was when he was going through the door for work and after that Friday, it's like I am in a nightmare that I cannot wake up from," Tomlinson said.

Anyone knowing the whereabouts of Omario Williams is being asked to contact the Stadium Gardens police at 876-978-9931 or 119.