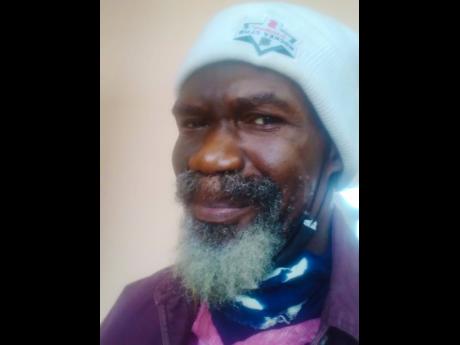 Local advocate Derrick 'Black X' Robinson says that although he has lost his larynx or voice box to stage four cancer, he will not be silenced and will continue on his mission to make Chief Tacky a national hero as soon as his health is stable.

Communicating via text message from his hospital bed at the University Hospital of the West Indies, Black X told THE WEEKEND STAR that he underwent a lengthy surgery on Wednesday.

"I woke up in intensive care yesterday (Thursday). I was told that the surgery was a very long one but I am back on regular ward now. I am unable to talk but I am alive and very happy. I am at a delicate stage now and anything can go wrong so I will continue praying and I welcome prayers as well. I miss my voice but it would appear that my family and friends miss it too. They just want to hear me speak. As soon as I am better I will be walking again," he said.

For over a decade, Black X has been walking barefoot on a mission to get the Government to bestow the nation's highest honour on Chief Tacky. However, earlier this year he became ill and was hospitalised after suffering from pain and breathing issues which stemmed from a swelling in his neck. He said a series of medical tests revealed that he had a cancerous tumour. Doctors swiftly removed his larynx to prevent the disease from spreading. Black X said he will remain in hospital for at least another two weeks after which he will begin radiation and chemotherapy treatments.

"I am currently being fed through a tube and my breathing will always come from my neck. Speaking will take a while as I have elected for speech therapy with a natural voice, and that the doctors says will be the hardest way, but I love a good challenge. Thankfully, I am on painkillers now and the medical staff have been really good to me so I am not in any pain. I am preparing myself mentally to take on the chemo and radiation therapy," he said.

The Rastaman stressed that after treatment, he will be back in the streets this October where he and a politician from St Mary will be walking for his cause.

"I am already planning a walk for Heritage Month and a politician said he will join the cause as well," he said.