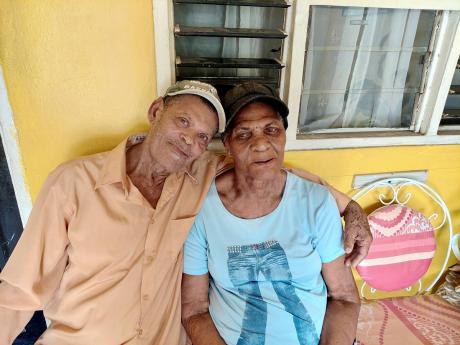 Lloyd Brown cuddles with his wife Joyce at their home in Seaview Gardens, Kingston 11. 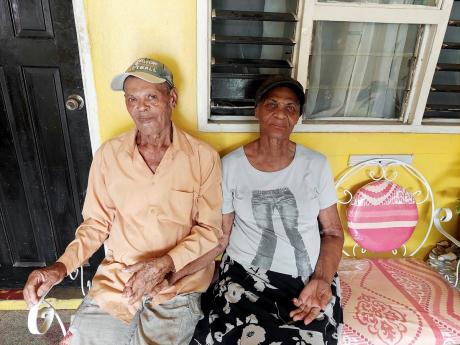 The Browns say that manners and respect are the strengths of their union.
1
2

Lloyd Brown extends his hand to his wife Joyce as she takes a seat beside him on the verandah of their Seaview Gardens, Kingston 11 home.

She playfully nudges him and, for a minute or two, the elderly couple joke with each other. The Browns are one of the most admired couples in their community. Their love for each other is as bright as day and Brown is often seen not only holding his wife's hands whenever they are in public, but also carrying her bags. He even keeps a handkerchief close to wipe her face.

"I love her, I don't leave her anywhere I am going. I carry her bag and hold her hand whenever she is going out. Sometimes she have memory problem so I don't let her go anywhere alone and I don't want to lose her. I don't see myself without her. I don't want her to fall down or anything, so I try my best to protect her," said Brown, 75.

The couple have been married for 23 years but have known each other for 39 years. Brown said that he met Joyce while they were working in the maintenance department at Meadowbrook High School. Their union has not produced any children but Lloyd has fathered six while Joyce has eight.

"We worked at the same place for 15 years and I always admire how kind she was. She was everything nice. She became my friend and I eventually leave the work in 1995 but she was still working there. I went away for about 10 years and one day mi just brave up and call her up and ask har if she woulda marry me and she say 'Yes, yes!' She was very excited and we got married in 1998," he said between peals of laughter.

Joyce, 80, looked on and gave a mischievous grin. She then leaned on her husband before saying: "I never want anybody enuh, cho."

Brown spoke highly about his other half's culinary skills but said that he has been the one preparing the meals for the past three years.

"She is very nice enuh. She used to cook some nice food. When yuh start eat, is like you don't want to stop eat," he said. They shared the strengths of their union.

"Respect and manners for each other is everything. A marriage or relationship cannot work without respect. Be careful of the words you speak to each other. Words can hurt bad enuh and sometimes she will tell mi something and it bun mi enuh, but mi go outside and make breeze blow it off and then mi come back come hug up mi wife. She very nice to mi, man. Every second, she will come and ask mi if I am okay and, even though her memory come and go, she always remember who I am ," Brown said.