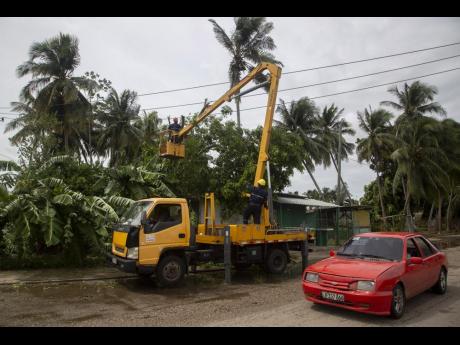 An electric company worker remove tree branches felled on power lines in the wake of Hurricane Ian in Havana, Cuba, Wednesday, Sept. 28, 2022. Cuba remained in the dark early Wednesday after Ian knocked out its power grid and devastated some of the country's most important tobacco farms when it hit the island's western tip as a major storm. (AP Photo/Ismael Francisco)

HAVANA (AP) — A few hundred Cubans took to the streets Thursday night in Havana demanding the restoration of electricity, protesting more than two days after a blackout hit the entire island following the passage of Hurricane Ian.

An Associated Press journalist saw a total of about 400 people gathered in at least two spots in the Cerro neighborhood shouting, “We want light, we want light,” and banging pots and pans.

It was the first public outpouring of anger after electricity problems spread from western Cuba, where Ian hit, and knocked out all of the island’s power grid Tuesday night, leaving its 11 million people in the dark. The storm also left three people dead and caused still unquantified damage.

In addition to power problems Thursday in Havana, internet service was out and cellphones did not work.

Groups that monitor internet access confirmed to the AP the internet disruption in the island.

“We can confirm the near-total internet blackout in Cuba,” said Alp Toker, director of Netblocks, a London-based internet monitoring firm. He said that what his group sees is different than what happened right after the hurricane hit the island.

“We believe the incident is likely to significantly impact the free flow of information amid protests,” he said.

Doug Madory, director of internet analysis at Kentik Inc., a network intelligence company, describes it as a “total internet blackout” that started at 00:30 GMT.

At a protest on Primellef Street, police arrived but demonstrators remained on one of the corners. About 10 blocks away, on the Calzada del Cerro, other protesters surrounded a work team trying to repair a pole and a light transformer.

The two groups of protesters were still in the streets late into the night, but the gatherings remained peaceful.

In July 2021, Cuba saw its largest social protests in decades. Thousands of people, weary of power failures and shortages of goods exacerbated by the pandemic and U.S. sanctions, turned out in cities across the island to vent their anger and some also lashed out at the government. Hundreds were arrested and prosecuted, prompting harsh criticism of the administration of President Miguel Diaz-Canel.

The government has not said what percentage of the population remained without electricity, but electrical authorities said only 10% of Havana’s 2 million people had power Thursday.

Earlier Thursday, Ivette Garrido shared how she hurried last week to get the 6 kilograms (13 pounds) of subsidized chicken allotted to her family by Cuba’s government and put it in the freezer, happy to have meat to get through Hurricane Ian.

Now she is considering giving the chicken to her three dogs before it goes bad as a huge power blackout caused by the storm extends beyond two days and everything in her freezer thaws amid scorching temperatures.

“We are not having a very good time, trying to survive, to keep things from thawing,” said Garrido, who lives with her mother and a 19-year-old daughter in the town of Cojimar on the outskirts of Havana.

Electricity returned in some parts of Cuba on Wednesday, while it came on then shut off again in other parts. Experts said the total blackout showed the vulnerability of Cuba’s power grid and warned that it will require time and sources — things the country doesn’t have — to fix the problem.

Authorities have promised to work without rest to address the issue.

“We have never been so long without electricity,” Garrido said. “They put it at 24 hours, at 36, but it’s already been more than 48. It’s criminal. Who is responsible for this?”

She has placed bottles of frozen water that had been in the freezer next to the chicken, along with some pork and sausages, to try to preserve the meat longer. A fan and television also await the return of electricity.

Calls by AP to a dozen people in Cuba’s main cities — Holguín, Guantánamo, Matanzas, Ciego de Ávila, Camagüey and Santiago — found similar problems to Havana, with most reporting their neighborhoods were still without electricity.

Authorities say the total blackout happened because of a failure in the connections between Cuba’s three regions — west, center and east — caused by Ian’s winds.

Cuba’s power grid “was already in a critical and immunocompromised state as a result of the deterioration of the thermoelectric plants. The patient is now on life support,” said Jorge Piñon, director of the Center for International Energy and Environmental Policy’s Latin America and Caribbean program at the University of Texas.

Cuba has 13 power generation plants, eight of which are traditional thermoelectric plants, and five floating power plants rented from Turkey since 2019. There is also a group of small plants distributed throughout the country since an energy reform in 2006.

But the plants are poorly maintained, a phenomenon the government attributed to the lack of funds and U.S. sanctions. Complications in obtaining fuel is also a problem.