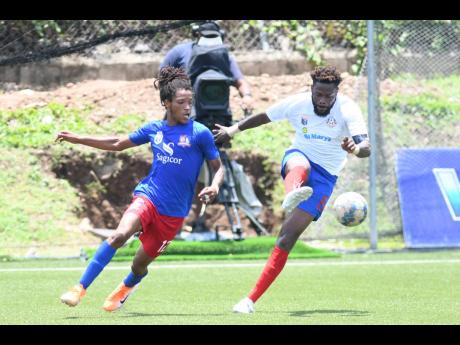 Dunbeholden FC’s Kimoni Bailey (left) challenges for the ball against Portmore United’s captain, Ricardo Morris, during a Jamaica Premier League match at the Captain Horace Burrell Centre of Excellence, The University of the West Indies (UWI), Mona, on Sunday, June 27.

Dunbeholden midfielder Kimoni Bailey revealed that prior to the start of their Jamaica Premier League (JPL) football games this season, the team holds a prematch ritual in honour of the late Tramaine Stewart, who passed away earlier this year after collapsing while playing football.

Bailey said Stewart's influence at the club was so massive that everyone at Dunbeholden felt a deep, personal loss when he died in April.

To show their continued respect and admiration for what he brought and meant to the club, Bailey said before every game the players observe a 30-second silence as a tribute to their late colleague.

"The little time that I was around him and being around him in training, you see how he trains and talk to the guys, especially the younger ones, even more than the older guys," he recalled. "He would have us (young players) in a group and talk with us and motivate us and tell us he wants to win the league.

"He would tell us he wants to see us improving our career by going higher in the league, or overseas to play football. So he is a good motivator," he declared.

Bailey, who wore a jersey in remembrance of the former national player during his JPL 'Star Baller' interview on Wednesday, said Stewart inspired all at the club that they could win the Premier League, and the players were eager to play alongside him this season.

"We knew he would have brought a lot to the team this season, but, unfortunately, he did not live to see it," he commented.

Bailey said Stewart's relationship with the players would extend off the training pitch, as he was always reaching out and checking up on his teammates.

"He was a very good person off the field, someone who calls you and talks to you. So whatever it is, he got you. So we definitely lost a lot, as he would have brought so much to the team if he was here. He definitely had an impact on the team."

Continuing, Bailey revealed: "We know he would love to be here to help us win those games, but we are working on it, as that is our aim, to win every game," he said. "Tramaine Stewart rest in peace always. My condolences to his family, friends and everyone."

Dunbeholden FC are lying seventh in the JPL standings with six points from five matches.