Plummer ready to hit the ground running with AIK 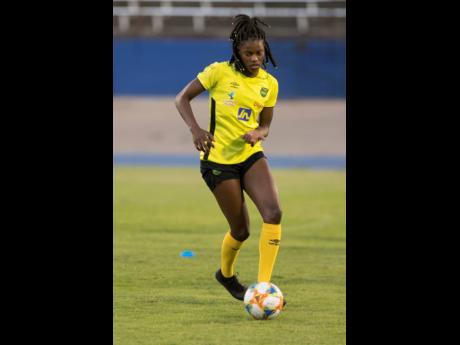 Having finally joined her new home in Sweden, national senior women's defender and captain Konya Plummer says that she is ready to bring her leadership qualities to the Swedish Allsvenskan with AIK Fotboll.

The 24-year-old Plummer had her first training session yesterday as a member of AIK one month after securing her loan deal from National Women's Soccer League club Orlando Pride until the end of the current season.

In an interview with AIK TV yesterday, Plummer said she is excited to hit the ground running immediately with her new teammates in their continued pursuit of a league title.

'I'm happy to be here. Everyone is really nice and it is a very competitive environment. I'm just happy to be here and (I'm ready) just do what I need to do," Plummer said.

AIK are currently leading the table with 40 points, two more than second-place Djurgarden and four more than third-place IF Elfsborg after 19 games played. Plummer is hoping to get regular playing minutes this season after only making seven appearances this campaign with Orlando.

"What I can bring to the team is to show up every day being my best self. That is the most important thing to just be yourself," Plummer said.

Head coach Anne Makinen said that she is excited to finally incorporate Plummer into the first team with the move pending on the receipt of her work permit and believes that her leadership qualities as well as her technical ability will be an asset to the team.

"A fantastic person and a great football player, so we're really happy to have her here. She is versatile can play many positions (primarily at centre back) but has also played as forward actually. Very speedy, good foot for passes, reads the game well and her leadership skills were obvious at the first practice, so that's something that feels extra fun," Makinen told AIK TV. "I feel like it's going to bring the team to the next level. We feel safe when we have Konya on the field and that's important, so it feels good."

Plummer could make her club debut tomorrow when AIK travel to seventh-place Kalmar FF for their league game at the Guldfageln Arena in Kalmar.