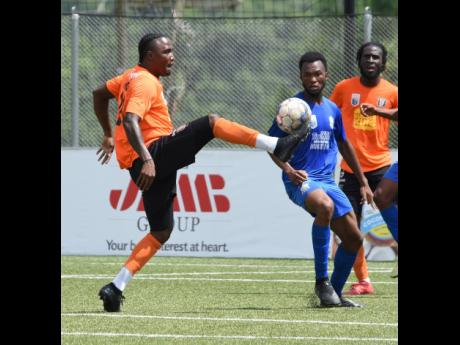 Jermaine Johnson (left) of Tivoli Gardens controls the ball during a Jamaica Premier League match against Molynes United on September 11.

When the sun finally sets on the playing career of Jermaine "Teddy" Johnson, he hopes that will involve lifting the Jamaica Premier League (JPL) title for Tivoli Gardens next month and not with play-off elimination.

Tivoli Gardens face Vere United in their second leg quarter-final tie today at noon at the UWI-JFF Captain Horace Burrell Centre of Excellence. The first leg ended in a 0-0 draw with both teams having chances in the second half to take some sort of an advantage.

Tivoli Gardens' play-off berth this year has been the culmination of a resurgence that started last season before the campaign was cancelled because of COVID-19 with the west Kingston-based club in a top six spot. It was also a season which they dedicated to their former club president and former Prime Minister Edward Seaga who passed away in 2019, months before that campaign started.

Johnson, who has come off the bench in Tivoli's last seven matches, says that it is not only an opportunity for the club to pursue another title but for the young players to test themselves at this level.

"It's a big stepping stone for the team. We were not playing for a long time and now the season is back and we are in the play-offs," Johnson told STAR Sports "It's a big opportunity for the younger players. We have a good chance to get to the semi-finals and see where we go from there."

At 41 years old, Johnson is in the winter of his career knowing that this, most likely, could be his final opportunity to bring a trophy back to his hometown club. But he is not looking to the future just yet as he is determined to focus only on the here and now, and beating Vere United to get to the semi-finals.

"Every footballer would like to win the league in their last season before they retire. We haven't won it in a long time. And for me to win it before I retire it would be a big statement for me and will help the young team as well," Johnson said.

In last Saturday's first leg both teams had very few chances. Nobody wanted to enter the second leg behind but with everything to play for the teams could be on the attack from very early in today's game. Vere's coach Donovan Duckie said he was 'pleased' with his team after the 0-0 scoreline so he could have something up his sleeve for the second leg.

Meanwhile, Harbour View will hope to turn around a two-goal deficit when they face Mount Pleasant in their second leg quarter-final game at 2:30 p.m. Mount Pleasant won the first leg 3-1, thanks to goals from Devonte Campbell, Kesslon Hall and Jourdaine Fletcher. Tyrese Williams scored the lone goal for Harbour View in stoppage time.

Mount Pleasant are looking to reach their second semi-final appearance in three years while Harbour View face an uphill task to avoid an early exit from the play-offs.