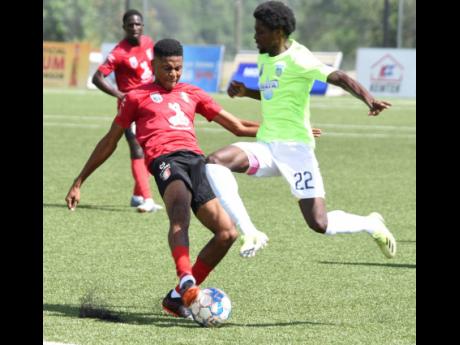 Colorado Murray (right) of Waterhouse evades a tackle from Earl Simpson of Arnett Gardens during their Jamaica Premier League match at the UWI-JFF Captain Horace Burrell Centre of Excellence in September. Waterhouse won the game 4-1.

Back in familiar environs, newly appointed Arnett Gardens FC head coach, Paul 'Tegat' Davis, says he is looking forward to the challenge of building the youth core of the club.

The former national forward was announced as head coach yesterday, four days after Alex Thomas resigned as manager. Davis's appointment will be his second spell with the south St Andrew-based club after spending two years between 2010-2012. Davis, who was at Mount Pleasant Football Academy for four years, says he is pleased to be back at a club that he always felt attached to.

"It's good. Arnett was always dear to me. So it's just as if (I never left). I am happy to be back at Arnett." Davis told STAR Sports.

Davis's return to Arnett ends a three-month hiatus that started in July when he was fired from Mount Pleasant shortly after the start of the 2021 Jamaica Premier League season. He had previously been the head coach in 2017, leading them to promotion to the top flight and returned as head coach in 2019 following the sacking of Donovan Duckie.

With his predecessor focused on cultivating the young talent for the 2021 season, Davis says that he looks to continue in the same vein, not only to build a championship team but to provide players to take the next level overseas.

"We are going to build on that. The focus is again to send players out, to let them go and earn honest cash for their very livelihood," Davis said.

While the focus is more on the long-term development of the players, Davis says that they are still ambitious in their goals and is focused on the task ahead rather than looking back.

"(My goals) are to win championships, build players and send them out all over in the world," Davis said. "I have a new squad to concentrate on and build a team so that is what I am going to focus on right now."