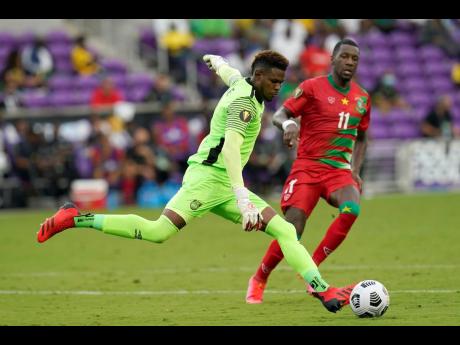 National goalkeeper and captain Andre Blake is in contention for another individual achievement in his career, having been nominated by the International Federation of Football History and Statistics for their Best Goalkeeper award.

Blake, 30, is among 20 candidates to be nominated for the award which has been won five times in the last seven years by German international and Bayern Munich goalkeeper Manuel Neuer. Blake's nomination makes him the only goalkeeper from the Caribbean to be considered, as well as the second from Concacaf, joining Costa Rica and Paris Saint-Germain's Keylor Navas. The winner will be announced at the end of the month.

Other contenders for the award are Liverpool's Alisson Becker, Manchester City's Ederson, and Real Madrid's Thibaut Courtois. Blake has kept 12 clean sheets so far this season with his Major League Soccer (MLS) club, the Philadelphia Union, his highest single-season total with the team since being drafted in 2014. He achieved a personal milestone on Sunday, with his 50th clean sheet in his MLS career in his team's 2-0 win over FC Cincinnati, and in the process made the playoffs for the fourth straight year.

Blake is a two-time MLS Goalkeeper of the Year winner, and made the MLS season-best 11 team in 2016 and 2020, the years in which he also won goalkeeper of the year honours. He has so far kept two clean sheets in the Reggae Boyz's FIFA World Cup qualifying campaign and has been called up for this month's slate of games against El Salvador and the United States on November 12 and 16, respectively.

Before then, Blake will face off in the Union's regular season finale with New York City FC this Sunday to determine playoff seeding.