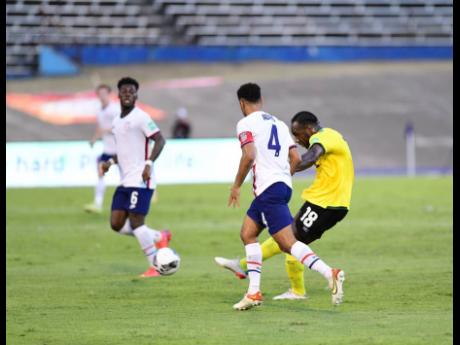 Michail Antonio (right) scores Jamaica’s equaliser from outside the box during yesterday’s Concacaf World Cup qualifier against the United States at the National Stadium. The game ended in a 1-1 draw.

National head coach Theodore Whitmore was coy in his remarks about the officiating crew which ruled out what could have been a game-winner for Jamaica, in their 1-1 draw with the United States in yesterday's Concacaf World Cup qualifier at the National Stadium.

Timothy Weah scored in the 11th minute but English Premier League star Michail Antonio registered his second consecutive goal in the campaign with an excellent strike from outside the box. However, the controversial moment was in the 83rd minute when Damion Lowe seemed to have given the Reggae Boyz the go-ahead goal but the effort was ruled out because of an apparent foul by the defender in the lead-up.

When asked about the particular incident, Whitmore in his post-game press conference said he did not want to address the controversial moment.

"That is something that I don't think that I want to talk about. Officials are there to do their job. From the sidelines, I can sit and say anything but it's just for me to look back on the tape. But I'm not a person who complains about officiating," Whitmore said.

The ruled out goal was the culmination of a game that was theirs for the taking in a match that required three points to start the second half of the Concacaf World Cup qualifying campaign. Whitmore admitted that they missed out on the opportunity to close out the game with the chances they had at their disposal.

"It was all in our hands. The USA didn't create any goal-scoring opportunities, they were gifted with a goal but I think the guys kept their heads. We stayed in the game. We managed to equalise and we could have gone on and won the game. Numerous opportunities presented themselves but I think we didn't capitalise on the game," Whitmore said.

Among those numerous chances was an open net opportunity for Bobby Reid in the 53rd minute when a failed clearance saw the ball fall to his feet but could only put his effort over the bar from less than six yards. In the second-half substitute Ravel Morrison also came close but his low drive was easily smothered by the United States goalkeeper Zackary Steffen.

Despite only picking up two points from the November window, Whitmore says that he is not ready to call it quits on the campaign.

"Not knowing the other results but we will keep fighting. And we will not stop fighting," Whitmore said.

Jamaica will play their first qualifier of the new year on January 27 when they host Mexico at the National Stadium.