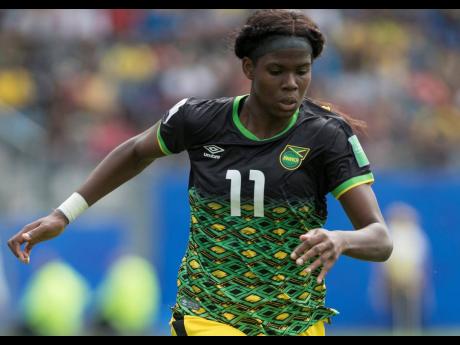 National striker Khadija Shaw's could be in line to make her return to competitive action for Manchester City today after a period on the sidelines because of injury.

Shaw, 24, who was unavailable for City's last three games because of a foot injury, could feature in their League Cup group stage clash with rivals Manchester United at Leigh Sports Village at 2 p.m.

Head coach Gareth Taylor said that Shaw is in line to make an appearance at some point in the game while not saying if she will start.

"We've potentially got Bunny back for a period in the game which helps," Taylor told the club website. Shaw scored in the corresponding league fixture in October which ended in a 2-2 draw.

Following Shaw's return to international duty in the Reggae Girlz 0-0 draw with Costa Rica on October 24, she managed to play in the Women's FA Cup semi-final against Chelsea which resulted in a 3-0 defeat. However, Shaw suffered the foot injury in training in the lead-up to their League Cup clash against Durham on November 4. At the time head coach Gareth Taylor said that while they gave her some time to hopefully have her ready, she was ultimately ruled out

"She wasn't able to get past the warm-up in training," Taylor said. "We decided to give her 24 hours but she was unlikely to make it. We waited until 1 p.m and it was confirmed it was too painful and that there was a bit of swelling."

In addition to that League Cup fixture she missed two league games, the 4-1 win over Leicester City on November 7 and most recently the 4-0 defeat to league leaders Chelsea which featured her Reggae Girlz teammate Drew Spence.

Shaw has scored six goals in all competitions so far in her rookie season in England, two of them being in league play.