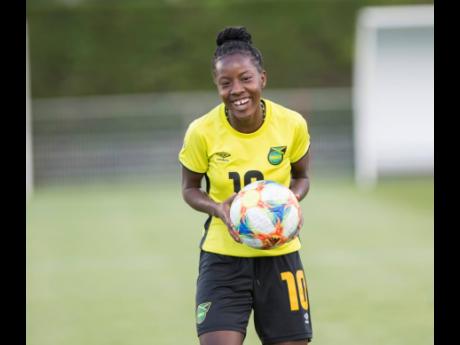 National and Florida State University (FSU) striker Jody Brown helped her college to take a major step in their quest to return to the national championship game on Sunday.

Brown, 19, scored her fourth goal of the season in their Women's College Cup round-of-16 game. It turned out to be the game-winner in FSU's 1-0 win over Pepperdine University. Brown netted the only goal of the game in the fifth minute, latching on to a pass from Clara Robbins using her speed to beat the defence and finished calmly past Pepperdine goalkeeper Zoe Clevely.

When asked about the pressure in ensuring that the team keeps to a high standard in the tournament in the single-elimination format, Brown said that she was more focused on doing her job for the group who are the number one seed in the tournament.

"For me, I don't really pay attention to that too much. I just go out there and keep fighting. It doesn't matter the team. They are coming in here and they are trying to get the win just as we are," Brown said during the post-game conference.

Brown's teammate Jaelin Howell credited Brown's play in helping them get off to the perfect start.

"Obviously, we knew that Pepperdine was going to come in and give it their all and we knew that they were a great team so we had to come out and compete. I think it started with that. Obviously, a great ball from Claire and Jody as fast as she is and as good as she is, had a great finish," Howell said.

FSU continue their march towards the national championship game this season with hopes of having a different ending than last year when they lost to Santa Clara University on penalties in Brown's rookie season with the Seminoles. In her second season, she currently leads the team in assists (10), and her play earned her a place in the All-American Coastal Conference (ACC) Third Team. Three of her goals this year (including against Pepperdine) have come from the College Cup tournament with strikes against Southern Methodist University and South Alabama respectively.

In an interview with the Tallahassee Democrat last month, Brown said that she was pleased with the progress she has made in her second season particularly in her offence and defensive play

"I feel like that I am doing a good job keeping those things tied together. I'm just a player that wants to share. I feel like every time I try to put myself in good positions to help my teammates and try to get a goal," Brown said.

Brown will hope to continue her recent form when FSU play number two seed Michigan University in the quarter-finals on Friday.