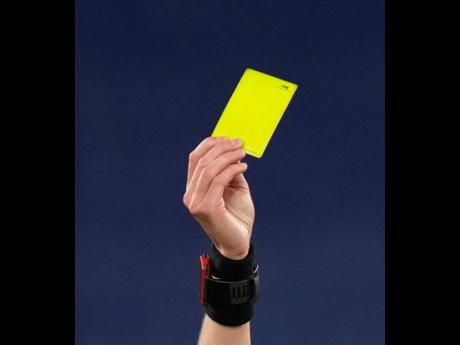 The English Football Association (FA) is looking into a yellow card shown to an Arsenal player during an English Premier League match this season after allegations of suspicious betting patterns.

The Athletic reported that bookmakers raised concerns with the FA after an unusual amount of money was placed on an Arsenal player being booked during a game. It did not name the player.

"The FA is aware of the matter in question and is looking into it," the governing body said yesterday.

A formal investigation has not yet been opened.

In April 2018, a Lincoln player, Bradley Wood, was banned from playing for six years after twice getting intentionally booked in the FA Cup the previous season.

Wood received a five-year ban for match-fixing offences, and a further 12-month suspension after admitting to 22 charges of betting on the outcome of matches and one charge of passing on information.

In 2009, former Southampton and England midfielder Matt Le Tissier published an autobiography in which he revealed he had placed a spread bet on the timing of the first throw-in in a match in which he played.

Le Tissier tried to over-hit a pass to Southampton teammate Neil Shipperley to force a throw-in, but failed to get the ball out of play. The matter was referred to police but prosecutors chose not to pursue a case.