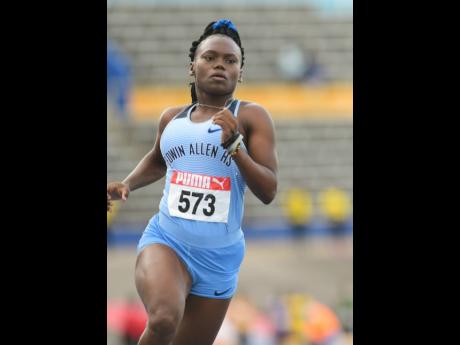 Edwin Allen's outstanding sprinter Serena Cole will be returning to the Frankfield-based institution next school term.

According to coach Michael Dyke, Cole, who was a silver medallist in the 100 metres at the recent World Under-20 Championships in Cali, Colombia, has turned down several offers from overseas universities.

He believes that Cole staying at Edwin Allen will aid her development, especially since she will get the opportunity to shine, with twin sisters Tina and Tia Clayton opting to go professional and expected to join the Stephen Francis-led MVP Track Club in September.

"There were offers there all round, but we decided that we wanted to improve on her PBs (personal best) and also to be a standout coming out of high school.

"The fact that she was overshadowed by the twins and now they are out of the way, she will be a lot more confident and believe in herself more going into next season," he said.

Cole finished second behind Tina in the 100 metres at the World Under-20 Championships but won the gold medal along with Tina, Tia and Kerrica Hill in the women's 4x100 metres in a world Under-20 record of 42.59 seconds.

Dyke pointed out that Cole has had a terrific year and therefore a lot more will be expected of her next season.

"It was excellent for her this year because she would have achieved a lot and she was a part of a world record relay team. She is a silver medallist at the highest level as a junior, and so I don't think we could have asked for more from her.

"She will definitely be the standard-bearer to hold the sprints together for us next season in Class One, and so a lot will be expected of her," said the veteran coach.