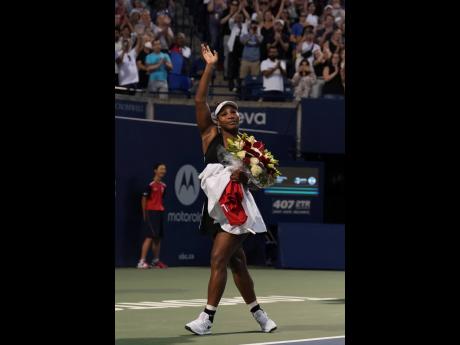 Serena Williams, of the United States, leaves the court carrying flowers and waving to fans after her loss to Belinda Bencic, of Switzerland, during the National Bank Open tennis tournament Wednesday, August 10, in Toronto. (AP)

Serena Williams wore her game face when she stepped out into the stadium for her first match since telling the world she is ready to leave professional tennis.

Greeted by a standing ovation, the 23-time Grand Slam champion didn't smile. She didn't wave. She took a sip from a plastic bottle as she walked in. Some folks in the crowd captured the moment with the cameras on their cellphones. Others held aloft hand-drawn signs -- oh, so many signs -- with messages such as "Queen" or "Thank you."

No one knows exactly how many more matches Williams will play before she puts her rackets away for good, and the 40-year-old American exited the National Bank Open on Wednesday night with a 6-2, 6-4 loss to Belinda Bencic.

While there were some familiar fist pumps and yells of "come on!" during the competition, it was only afterwards that Williams really allowed her feelings to show, her voice shaking and her eyes welling during an on-court interview when Bencic ceded the spotlight.

"A lot of emotions, obviously," Williams told spectators who offered her encouragement throughout the clear, 75-degree evening.

The second-round match at the hardcourt tune-up for the U.S. Open came a day after she announced "the countdown has begun" on her playing career, saying she wants to have another child and pursue business interests.

She did not state precisely what her last event will be but did make it sound as if her final farewell will come at the U.S. Open, which begins on August 29 in New York. Williams has won the singles title at Flushing Meadows a half-dozen times -- first in 1999; most recently in 2014 -- to go along with seven championships apiece at Wimbledon and the Australian Open, plus three at the French Open.

"It's been a pretty interesting 24 hours," Williams said after Wednesday's match.

"I'm terrible at goodbyes," she added, her hand on her chest, "but goodbye, Toronto!"

Next up on her schedule is the Western & Southern Open in Cincinnati next week, another event that serves as preparation for the year's last Grand Slam tournament.