Jobs & Careers: CESSPOOL WORKERS ENJOY THEIR TASKS - Not bothered by the smell, or ridicule from the public 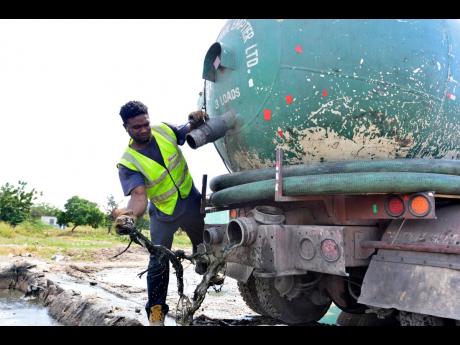 Dellton Johnson empties the truck of its murky contents. 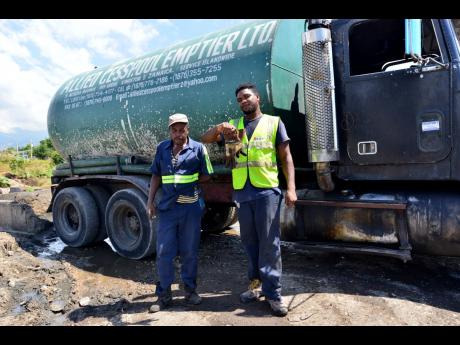 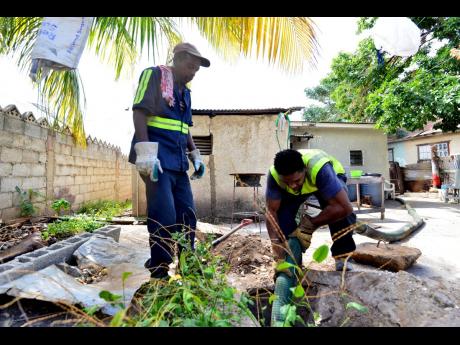 Livermore (left) looks on as Johnson gets a hose into a manhole. 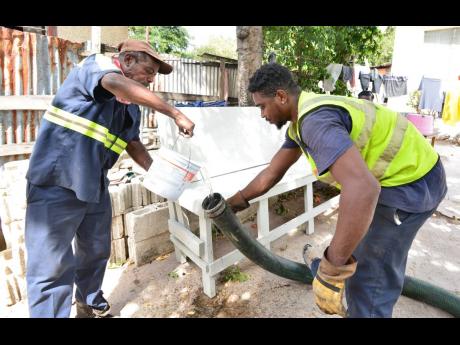 Livermore (left) is assisted by Johnson to pour water in the hose as a method of cleaning it after it was used to draw sewage. 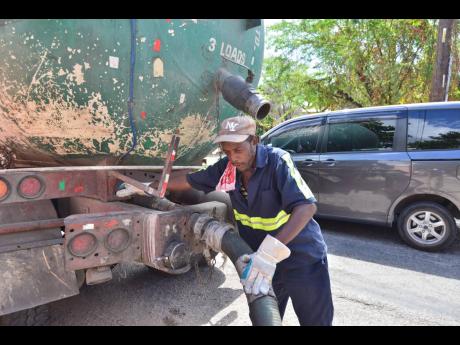 The mere mention of the word ‘sewage’ conjures up sickening images of faeces and dirty, pungent water from homes, factories and manholes.

To clear them usually requires a full day of work, which keeps those tasked with the job away from their families.

They are even out on holidays, covered and stained in the waste they dispose. This is the life of sewage cleaners.

The men journeyed to Greenwich Road in Kingston, then to the Greenwich Farm Treatment Plant to dump the collected waste.

The younger of the two-man team, Dellton Johnson, has been a sewage cleaner for eight years. Getting up and going to work each day isn’t a problem, because he describes it as easy.

“Yuh know say the work nuh difficult? It nuh difficult none at all. Me get used to the work now and love it. The first time now, it did hard, but when you get used to it, you understand everything. Most of the things dem come like nothing,” he said.

The scent that would upset the average person doesn’t bother him, after almost a decade of practice.

“It a go bother yuh the first time. But while yuh deh-deh and a work, you will get used to it and everything. More while, you don’t smell it none at all. When the vacuum start, the scent a go come out still, but it out in the air, so you nah go smell it unless yuh deh near,” he said.

His teammate, Simion Livermore, has dedicated 15 years of his life to cleaning sewage. He doesn’t care whether or not he is respected for it.

“I don’t care about the respect. I’m doing something that is my honest bread and I love it, so nuh matter weh yuh wah call me or tell me … when we done draw the sh*t, we will talk. You can do all the dissing … me come fi clean it fi you, because you can’t do it, and me feel nice bout dat,” Livermore said.

Livermore adores the role he plays wholeheartedly. After each workday, he beams with fulfilment. He adds, however, the some customers are hard to satisfy.

“Dem miserable and hard fi please. Otherwise, me enjoy the work … me love it. Me love fi know me can do something weh important to me. Even though dem call me ‘sh*t man’, me love it,” he said.

He admits that every now and then, he gets a bit peckish while working; and years ago, he would’ve starved himself on the job.

Today, he doesn’t have a problem with pulling out a snack and refuelling his body.

“Me do it a lot, enuh. Yuh no supposed to, but because we get so used to the work, it come like nothing, to be honest. Me stand up over that and eat and me stomach no sick,” he said, laughing.

Individual commitment gets the job done, but teamwork makes it much easier.

“A me and him alone work. Me do the heavy lifting. We just work together. If him want a rest, me just do the work and give him his five minutes. Then when him ready, we just start again,” Johnson said.

When Livermore just started, the job took a toll on his health. But he has learnt to protect himself while still getting the job done.

“True me have bad skin, more time it used to mek me sore up. But me get fi understand how fi protect miself now from it. Therefore, me no have no problem again. We have gloves, we put on long sleeve, so, therefore, we protect we skin,” he said.

Both men have been scorned and disrespected incessantly by the very customers they assist.

“Dem scorn the work, and a fi dem things yuh a draw. We laugh because it come like fun to we now,” Livermore said, admitting that he would argue with them in his rookie days.

Johnson says they have learnt to block out the noise and avoid negativity.

“Ina da work yah, you affi just keep calm and just work over them,” he said.